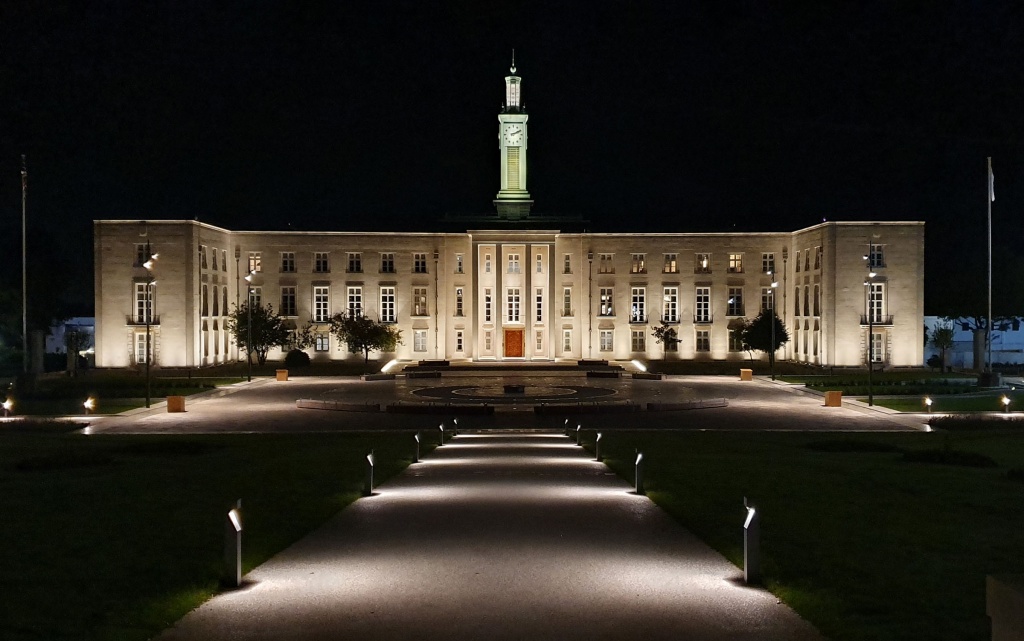 The impressive Grade II listed building is the HQ of Waltham Forest London Borough Council, and the exterior lighting scheme was part of a substantial two-year refurbishment and upgrade project involving the whole building and its immediate environs.

Hawkins\Brown architects was appointed to transform the stripped classical style Town Hall opened in 1942 into an integrated modern workspace combined with a lively civic campus that would welcome staff, visitors, and residents to the heart of a thriving and diverse east London community.

As part of that masterplan, Hawkins\Brown tasked the Pritchard Themis team with crafting the exterior lighting.

Using the quality output and superior colour mixing of Anolis, a stylish signature white illumination was created for the front of the large H-shaped Portland Stone building, complete with an array of dazzling colour changing special looks to celebrate ‘flag days’, national and ethnic festivals plus other cultural and social events and occasions.

The renovations involved the design and installation of a super-cool centrepiece water feature in ‘Civic Square’, the plaza in front of the complex, comprising 144 individually programmable water jets that can light up and dance to music, which has been a big hit with the public.

In addition to illuminating the Town Hall facades in the crisp white base colour, the Emineres provide large coloured backdrops to offset the water feature, so colour was central to Peter Pritchard’s quest for a bright RGBW linear fixture with a low profile and a tailored finish for maximum neatness.

High colour rendering was another prerequisite, sustainability was a given and the luminaire needed to be available in different lengths and with a variety of optics.

Anolis ticked all the boxes, so Pritchard Themis specified the versatile Eminere range, which is available as inground and surface mounting versions.

The Eminere offered plenty of flexibility within the one family of products. Peter loves the quality of the output, the intensity, the DMX control, the super-smooth dimming, and the finessed colour mixing as well as the wide choice of lenses.

Additionally, “the service from Anolis was fantastic, especially given that we were mid pandemic, and everything was a logistical and practical challenge at that time!” he stated.

Fifty-six Eminere 1, 2, 3 and 4 RGBWs are located around the building, mostly attached to a low perimeter ledge, with some deployed on the (window) balcony facades to help eliminate shadows.

The different lengths and beam angles were meticulously calculated to give optimum coverage and the classy, streamlined appearance that Pritchard Themis envisioned.

Eighteen inground Eminere 2s are carefully positioned to up light the central portico area, its four prominent columns and the relief behind to complete the look.

Achieving uniformity and a beautiful, even wash of luminance across the entire 80 metre front span united the core aesthetic with the perfect 3000K warm white hue, for which the LED engine was customised by Anolis.

The richness and subtlety of the Anolis colour mixing made it straightforward to create the dramatic and vivid flag day scenes, with over 30 pre-programmed into the Pharos controller and available for selection and activation by the client at the touch of a button. Others can be created as needed.

Luminaires are automatically powered on and off at the correct start-up / curfew times to further help respect and preserve the environment for bats, insects and assorted other wildlife and birdlife.

Furthermore, DMX control of the Anolis fixtures means the building lighting scheme can be hooked into guest lighting systems for events staged in and around the plaza, as it is intended to host year-round arts and cultural events.

Retaining essential classic architectural details and form whilst presenting the building in a new 21st century light and situational relevance, the design has delighted everyone.

The lighting and water feature have already energised the plaza with instant effect as people feel comfortable and safe congregating and mingling, appreciating the ‘new’ environment in daytime and after dark.

“All the issues of delivering the project during the pandemic were overcome with fantastic collaboration, positive energy, multiple online meetings, remote consultations, and everyone having a clarity and focus on the goals,” said Peter, adding that the client was also very hands-on in terms of project management which set a brisk pace and underlined the success of a collective can-do approach.

The consulting engineers were Ramboll and the main contractors were ISG, with the Anolis and façade lighting programming completed by Maria Jenkins on behalf of Lug Lighting. Integral to the whole project were landscape architects, Churchman Thornhill Finch. 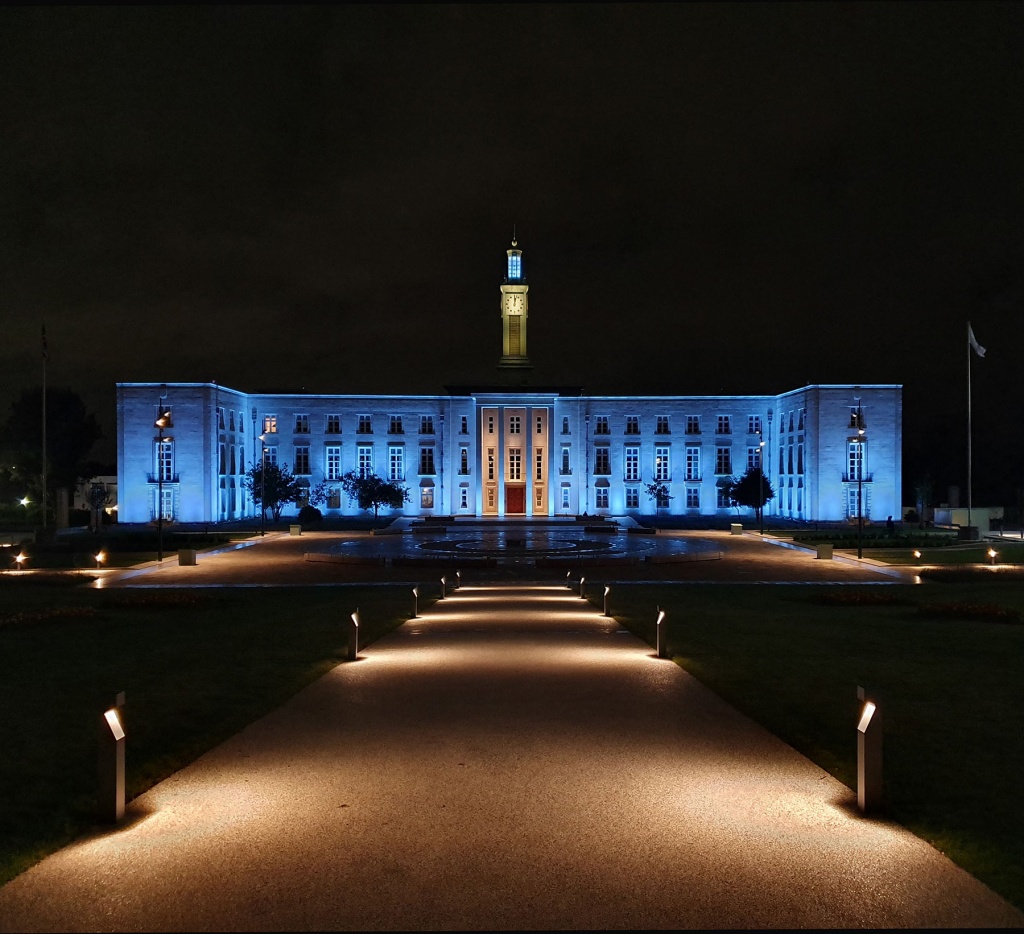 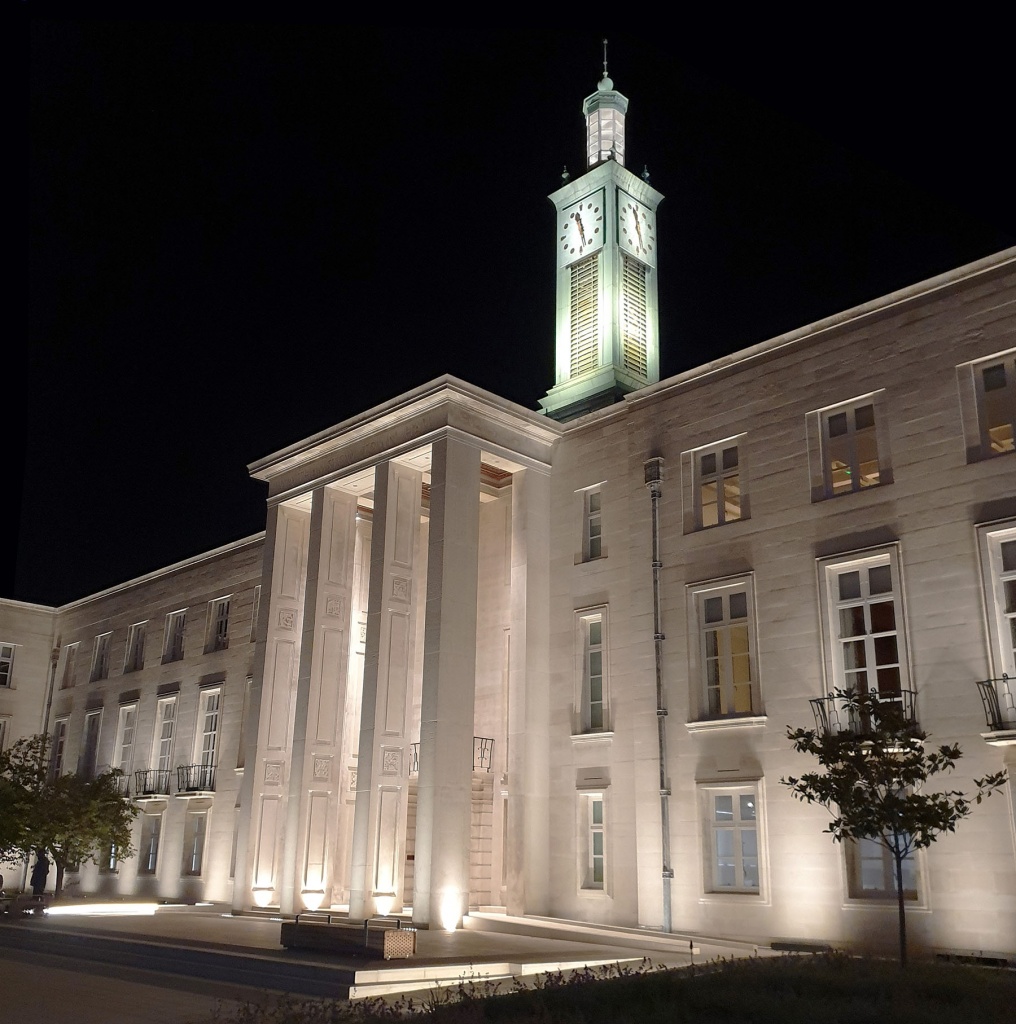 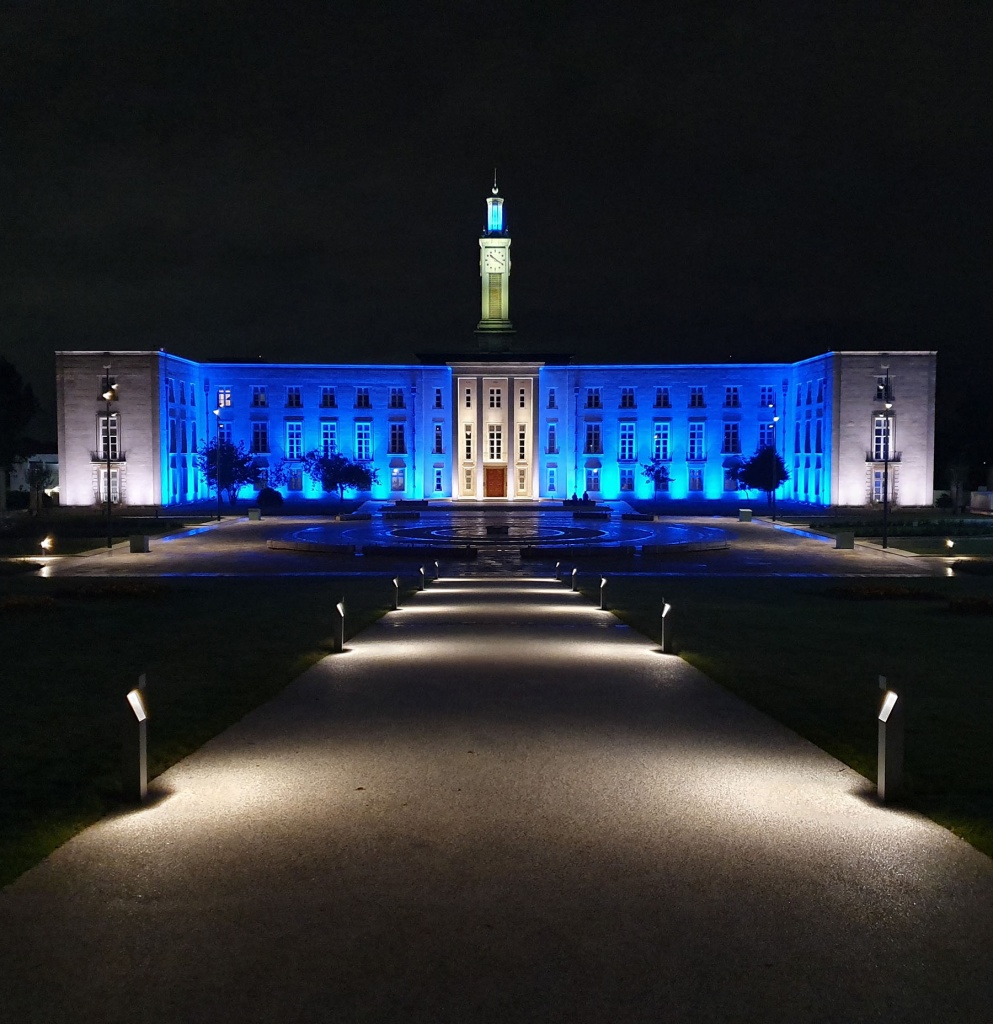 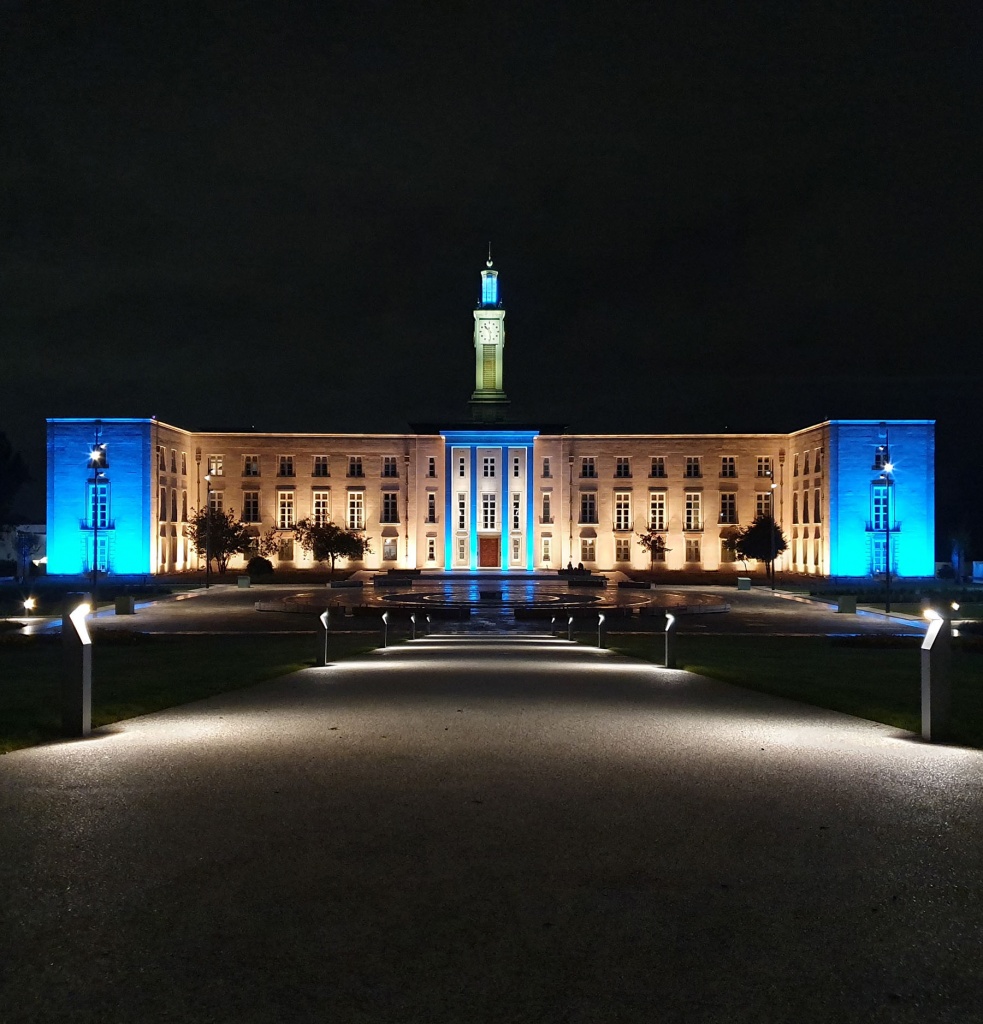 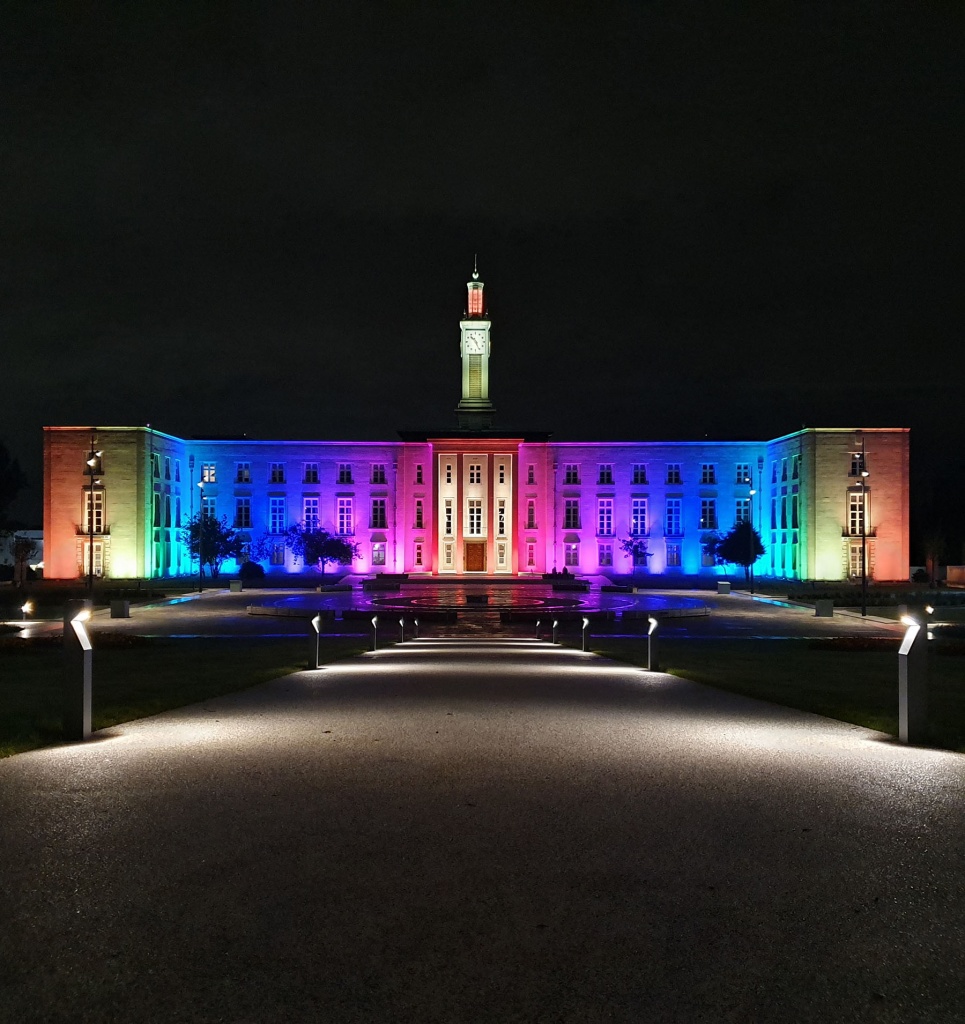