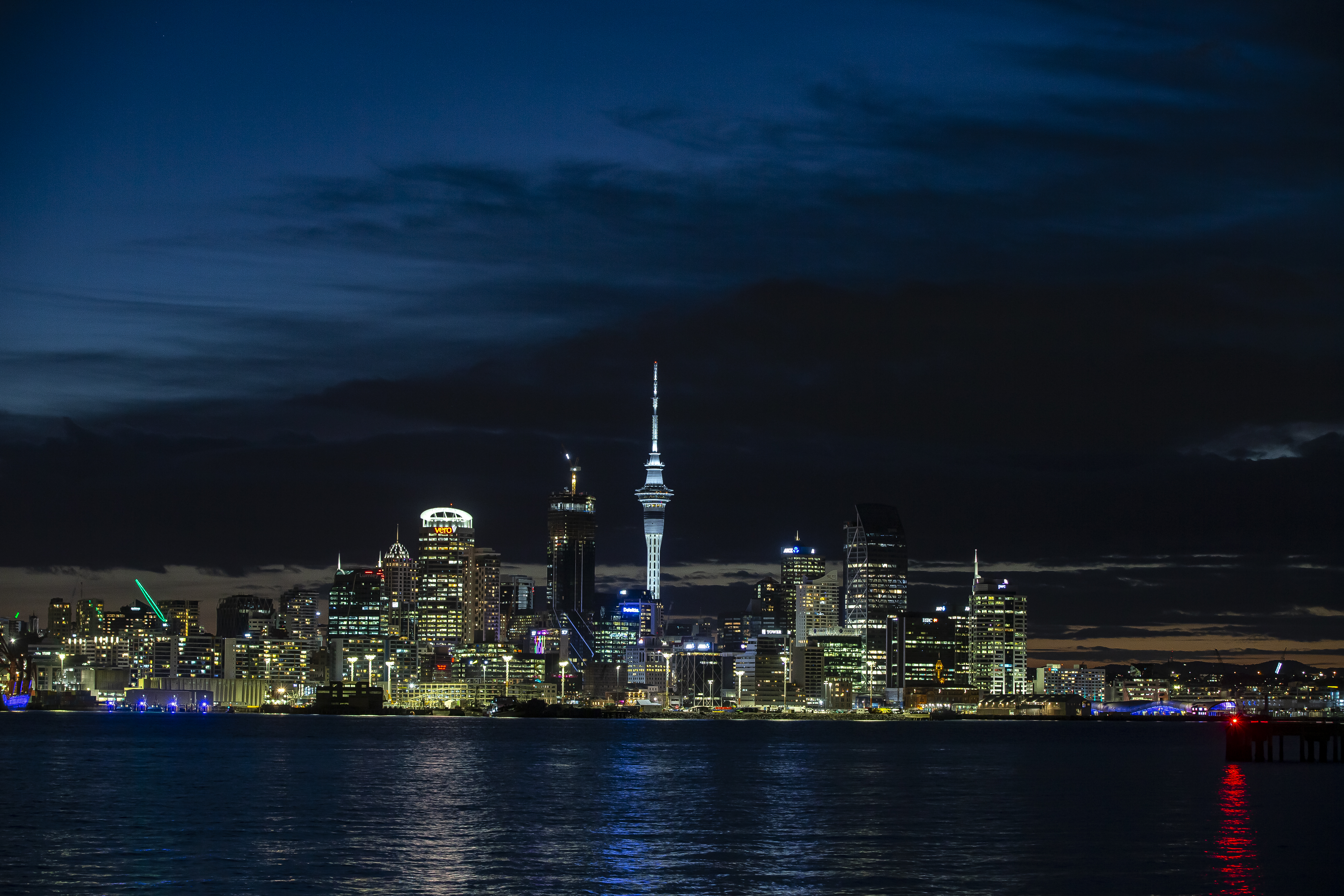 The high-profile landmark is also a vital telecommunications hub and a popular observation point sitting at the heart of and presiding over this vibrant metropolis.

The lighting design was created by Richard Bracebridge and Sam Walle from Light Works Ltd. Technical specification, installation and systems integration were the work of Nick Abel from LS Group, with lighting fixtures supplied through Anolis’ New Zealand and Australian Anolis distributor, Jands.

Light Works has been involved with lighting the Tower since 2007 when it was first re-lit following the original metal halide installation which dated back to 1996 whilst it was under construction.

The 2007 floodlighting involved re-lighting the shaft – utilising positions on top of some conveniently located bus shelters along Federal and Victoria Streets below – and upgrading the upper part of the tower and mast using the best quality RGB LED floodlights available at the time.

Forward 11 years, and by 2018 the installation was – unsurprisingly – looking patchy and dated, and in that time, LED technology had advanced dramatically, becoming brighter, more efficient, hugely more effective, and better value.

The team faced several challenges, starting with the ongoing city centre and waterfront regeneration project, which saw the removal of the bus shelters and the installation of some sculptural artworks around the base of the Tower.

While these did offer up some ‘top space’ for mast illumination lighting positions, the footprint was vastly reduced, and not in optimum positions for effectively lighting the shaft section!

Lighting real estate on the ‘shaft’ for fixtures to highlight the top section was even more at a premium … as any fixtures had to share the space with a forest of communications equipment including FM radio transmitters, local and national TV satellites and broadcasting kit, wireless internet hubs, cell phone hubs, weather monitoring and laser links.

So, size and space criteria initially informed the choice of fixtures for both top and bottom elements of the tower. The Anolis Divine 72s, which had just been launched at the start of the project, were selected for these and several other reasons.

The signature colour was white, so they needed to produce a proper crisp white with the smoothest and most even coverage.

The size and shape of the fixtures made the Divine 72s ideal for fixing on the top of the street level sculptures, with 96 units sitting on top of the three building locations and a single column “artwork” at the base of the Tower.

Sixty Divine 72s are deployed around the Tower’s top section, ensconced between the various communications elements.

To optimise the dynamics of the positioning and the different throw distances and angles, they are fitted with a variety of lenses … which are readily available with the Anolis Divine ranges.

Being downtown and an urban residential area as well as a CBD, extreme caution was needed to minimise light pollution and keep the lumen focus concentrated on the Tower.

The Divine 72s are run via a Pharos LPC 2 controller that can be remotely accessed via phone and tablet app.

It can instantly be switched into any colour or any number of combinations at the touch of a button for special occasions.

The upgraded lighting scheme was proudly launched with a 30-minute choreographed lightshow synchronised to a music track played by local radio station The Breeze, allowing the whole city to enjoy the spectacle. 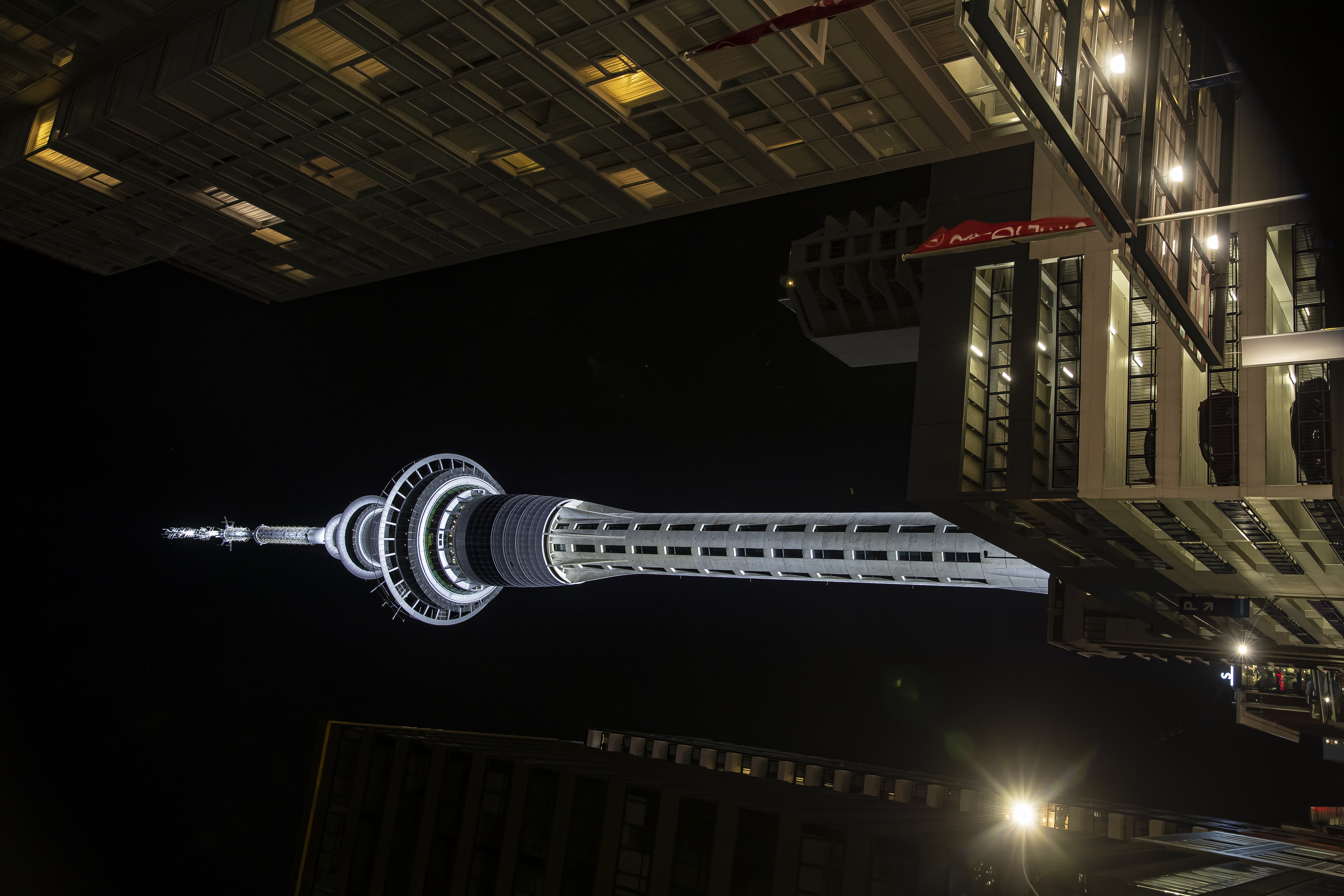 The Sky Tower was opened in August 1997. It was designed by Gordon Moller of Craig Moller Architects, can withstand 200 km/h (124.3 mph) winds, resist high-magnitude earthquakes, and has received multiple awards. It was built by Fletcher Construction with design management provided by engineering specialist Beca Group.

The Tower is built from high performance reinforced concrete, the 39ft diameter shaft weighs over 170 tonnes and had to be lifted into place using a crane attached to the structure. To remove that crane, another had to be built – attached to the upper part of the structure – to dismantle the big crane and then in turn be broken down into small enough pieces to fit into the elevators!

The shaft contains four lifts and an emergency stairwell and is supported on eight legs based on 16 foundation piles that are drilled over 12 metres into the ground.

The Tower is a massive tourist attraction! Visitors can bungy jump off it or walk along the outer ledges to get an awesome 360-degree perspective on the city and surrounding areas, or dine in three top-notch restaurants, one of which revolves. 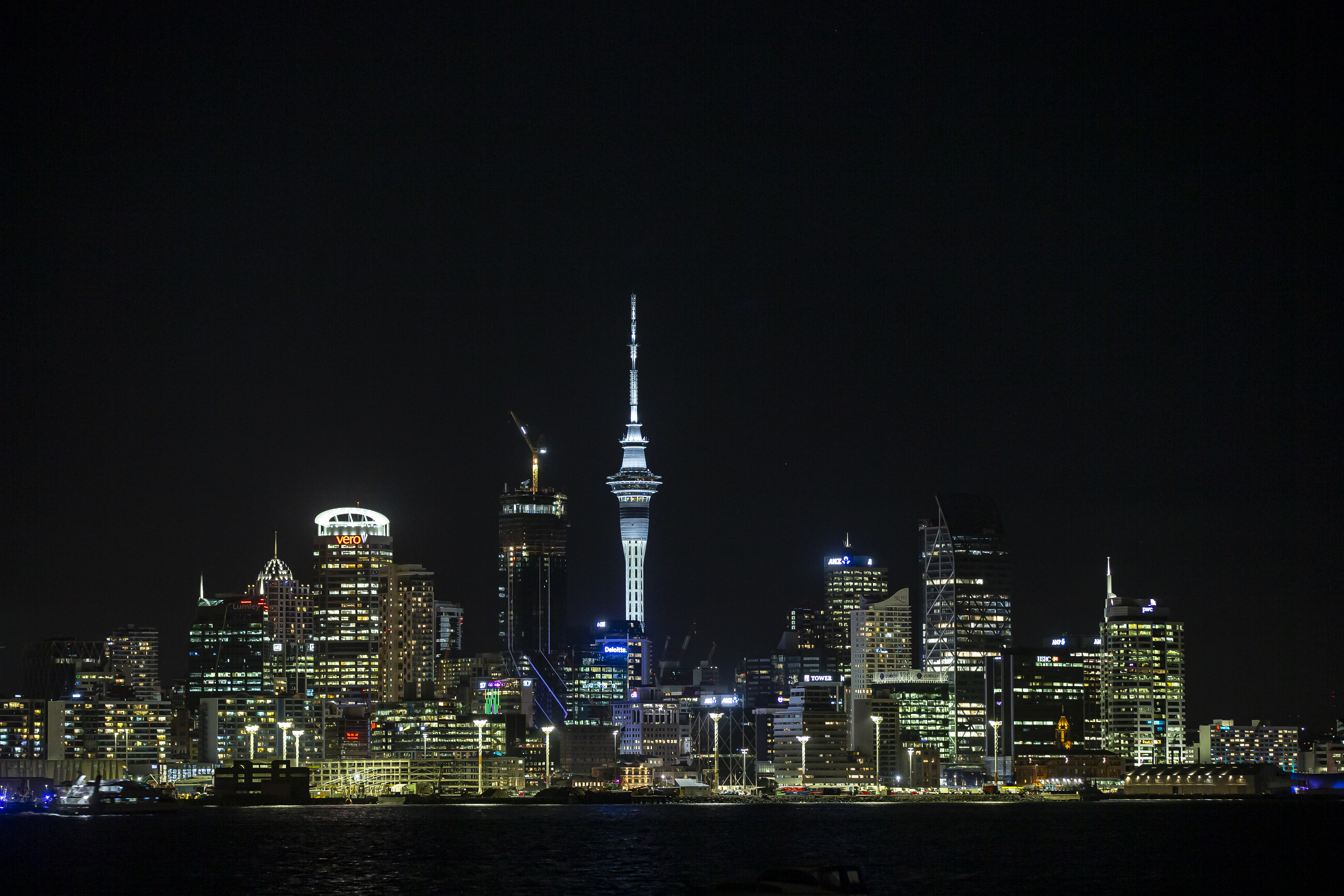 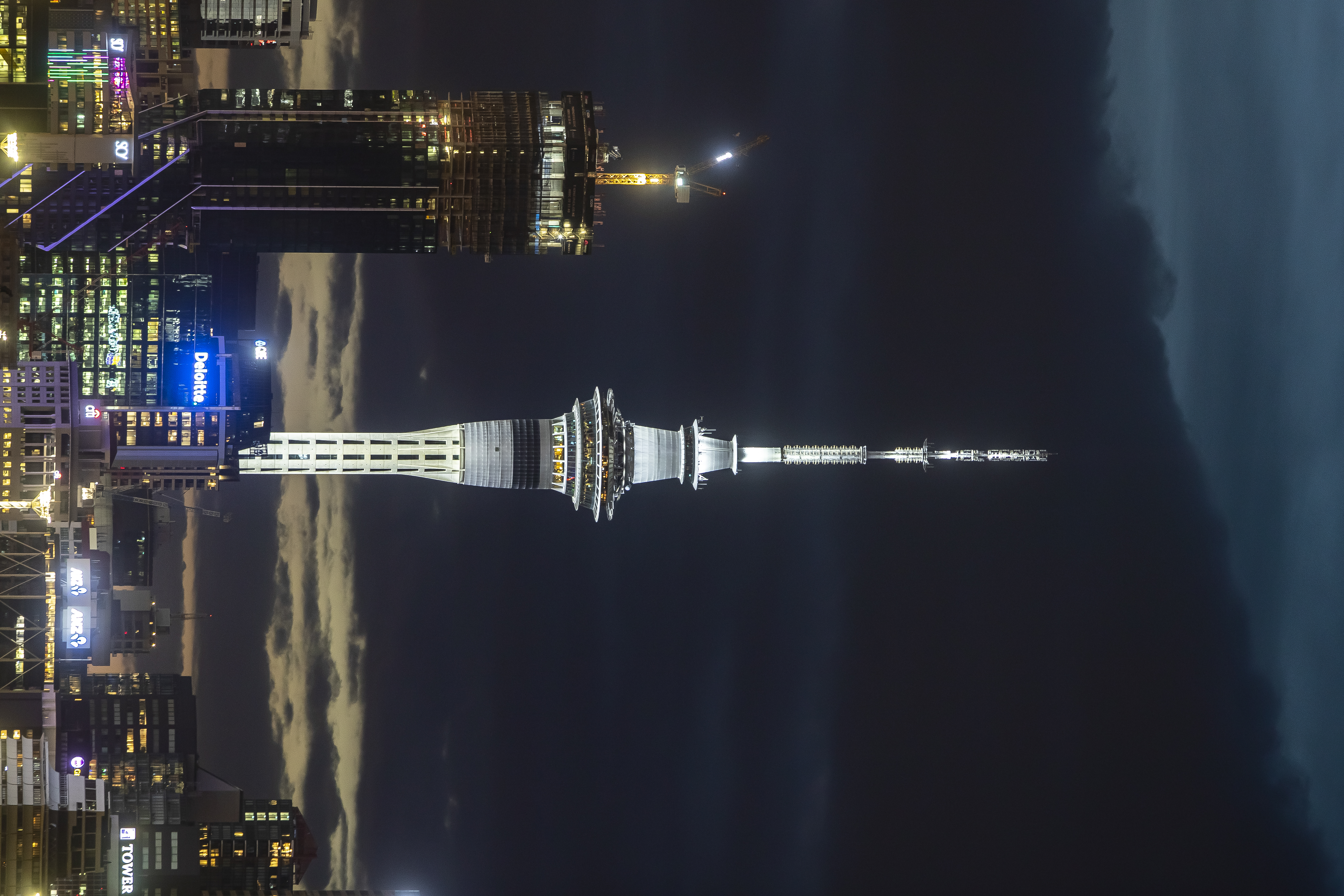 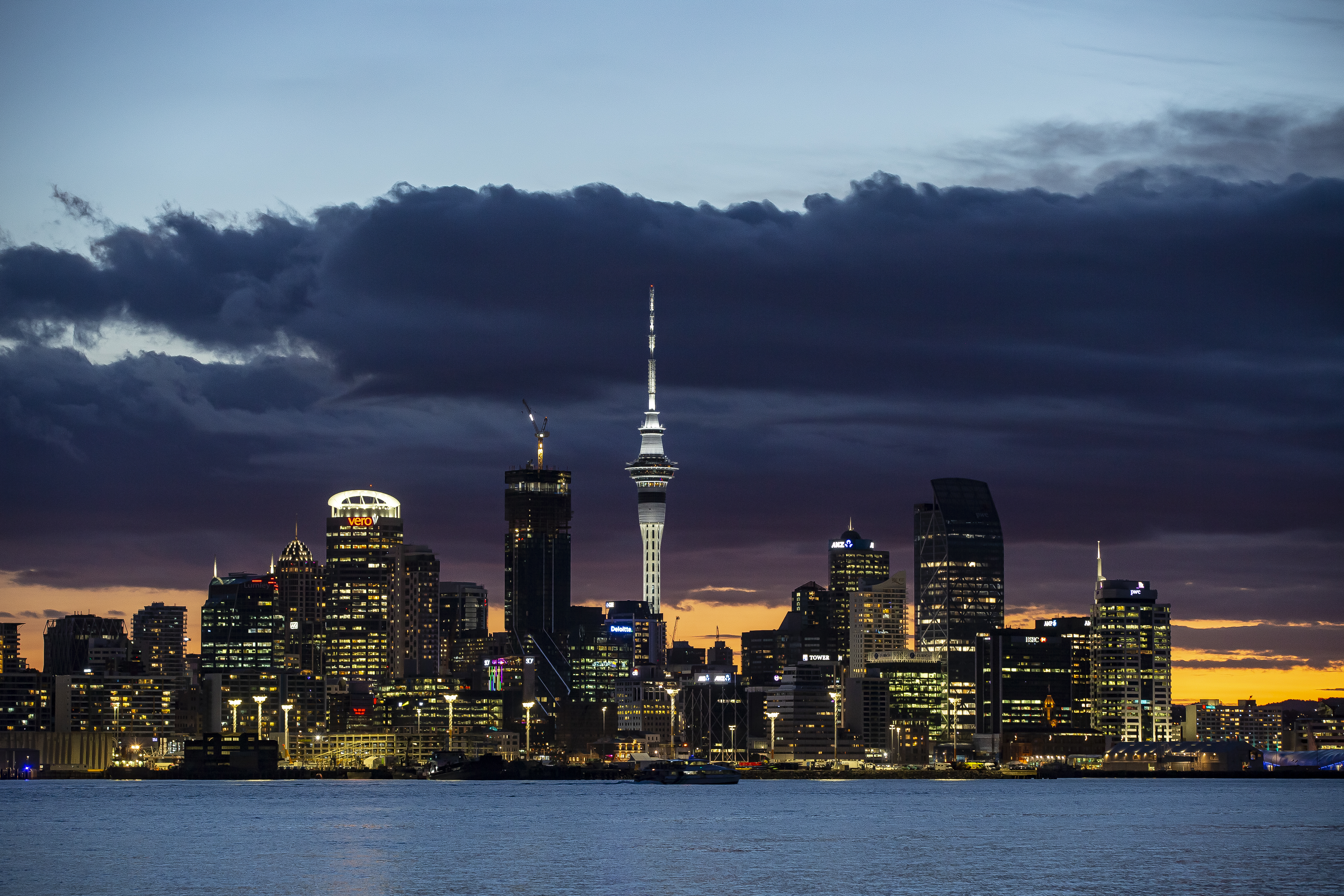 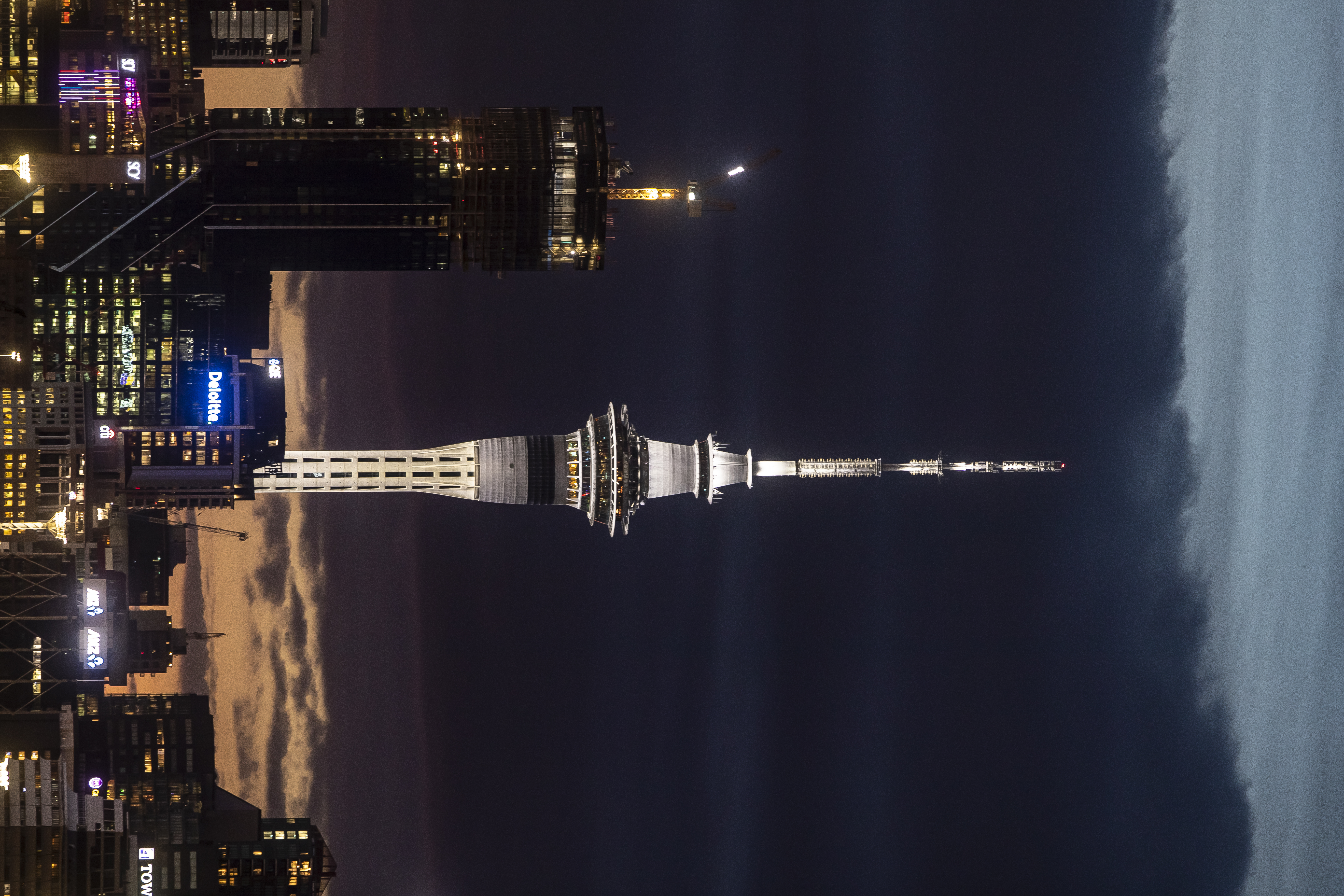